No products in the cart.
Home » Shy Bunnies – How to Gain Their Trust

Shy Bunnies – How to Gain Their Trust

Some bunnies are trusting, confident, and immediately enjoy the attention of their new families (like Bunny), others are shy and skittish and require more time to feel secure (like Bailey). Rabbits have different needs based on their distinctive personalities, but all of them are worth loving. Our Bailey was extremely shy and skittish when we adopted her. Here’s what we did to earn her trust after our first failed bonding attempt, which convinced us to give her time alone in the new house before introducing her to Bunny again.

We placed her cage in the room that I spend most of my time in: the office. During the day, the cage door was always open and I worked away on my computer near her. Bailey didn’t come out for several whole days, but I didn’t force her. Instead, I talked to her, gave her food, and offered treats without petting her or picking her up. If you don’t work from home, you can read a book near your bunny or watch TV instead. The goal is to get the rabbit used to your presence, knowing you are not a threat.

Several days passed and finally Bailey hopped out of her cage and explored the house timidly without us interfering. We made sure that she had several safe spots that were clearly meant for her in the room and all the other rooms she had access to. This is important! If Bailey thought that the only thing that was hers was the cage, she might not have spent as much time outside of her cage as quickly as she did or she might have picked spots that weren’t ideal. It worked well for us. For example, there was space between the cage and the wall, which created a little tunnel. A towel with a pile of hay was also nearby and she had a cardboard box with two entrances. Interestingly, Bailey loved two things that created a little barrier between her and the rest of the room without locking her in. One was a cardboard box without a top and 3-4″ sides all around. The other was her wire cage top, which we placed on the floor with the top lid open, so she could look out. Even though it didn’t truly make her safe, she felt protected and even let us pet her head while sitting in the box or behind the cage top. 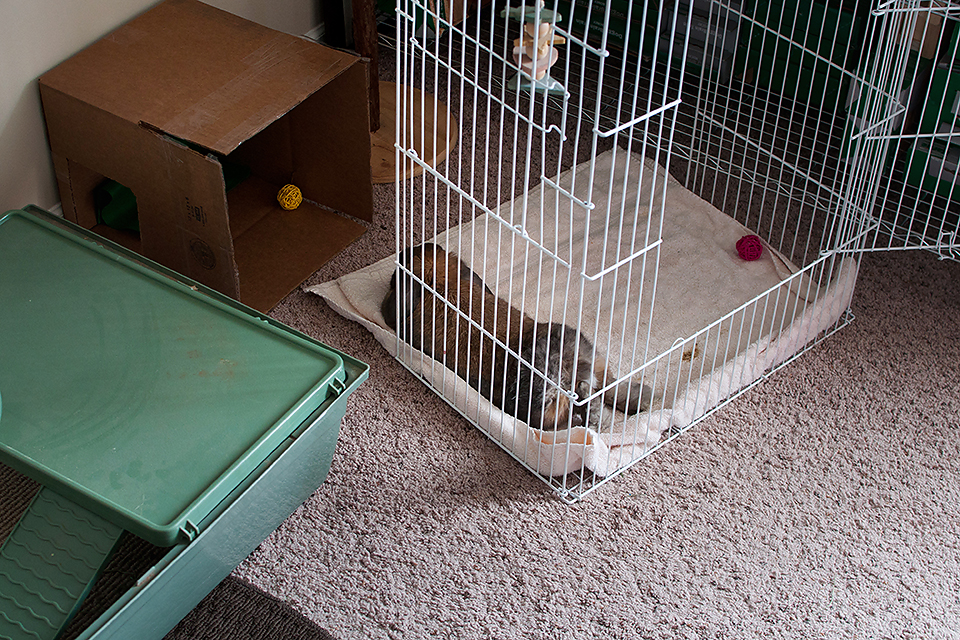 She also had access to the bedroom, so she was able to sleep under the bed, which is what she did now for 10+ hours every day. The rest of the time she’d spend in one of her other spots. 4-5 times a day one of us would place a treat near the bed or wherever else she slept at the time. After a while, she even let us hold the treat while she ate. We let this under-the-bed routine go on for several weeks and Bailey became more and more confident around the house and with us. Whenever she was in a cuddly mood (which didn’t happen often), she let me kiss her head, wrap my arms around her for a few seconds, and a couple of times she even groomed my hand. Still, she didn’t like being approached in the open, only when she was in one of her safe spots. 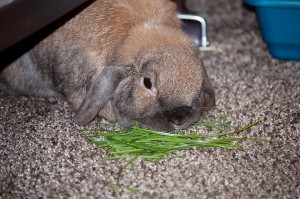 Bailey peeking out from under the bed to eat some fresh grass.

At this point it became clear that she wasn’t truly a part of the family, because she spent so much time under the bed. It was a great way to calm her down at first, but now she needed to be included in family activities, which usually take place in the living room. The bonding process (with Bunny) started all over again, but I will not focus on that for this article. Bailey now had a playpen in the living room next to Bunny and got to hop around while we ate dinner, watched TV, talked about our day, and so on. There were safe spots for her in the room, but nothing to completely hide under for hours at a time. Again, we let her explore without forcing any cuddles. Sometimes she’d come to one of us sitting on the floor, nudged us, and accepted some head rubs.

As she became more confident around the house, the bonding also progressed nicely. Once Bailey and Bunny were bonded, both of the playpens were removed, but we left a corner of it standing for a few weeks, because it made Bailey feel safe. We didn’t know if it would stay there always or if it wouldn’t be necessary in the future. Luckily, we got to get rid of it eventually. It’s been many months and Bailey is still shy, but her bossy personality is coming out slowly. She often pushes our hand away if she doesn’t want to be cuddled (or if we’re doing it wrong) instead of racing away. She doesn’t demand headrubs like Bunny does, but she accepts them when she feels like it. She comes running over whenever she thinks one of us has a treat and she’s a part of the family. With a little more patience, she will be just as confident and trusting as Bunny, no doubt about it.

Here are the main points in a nutshell:

The in-between stage with the baby gates still up to make Bailey feel safe.

Our current free-range set-up. The bunnies love it! They often cuddle under the ramp.

Proof that Bailey feels utterly at home. She won’t even budge an inch when we vacuum around her.