No products in the cart.
Home » Bonding Our Free Range House Rabbits

After two failed bonding attempts in March and May, we now had two separate free range bunnies, one living upstairs and one living downstairs. There was no neutral territory left. To make it even more difficult, Bunny had never experienced living with another rabbit and sharing his territory every day, so he wasn’t too thrilled to do so now, and Bailey has a little disability (weak hind legs).

At least Bailey finally feels at home with us and while she’s still shy, she lets us pet her for short periods of time. Her indifference toward food has turned into excitement, too, and her hay and pellet diet has been changed almost completely now to a hay and produce diet. Her fur is much softer and she turned out to be a sweet, clumsy little bun.

One day in early July our resolve to bond the two returned and we decided to try something unusual and a little more drastic. We needed to be creative and were determined to make it work this time.

I cleared an area in the living room and placed a cheap plastic drop cloth on the floor. They cost around $3 and are meant for painters. On top of it, we added the cheapest large area rug we could find ($19.99). Since Bunny wasn’t allowed to enter the office in our old home, we already had a couple of baby gates. We added a few more at $10 each and tied them together with cable ties. Now we had a playpen with two separate areas. Both had the same litter box, a water bowl, a hidey place, a towel, and a couple of small toys. The baby gates worked really well for us, because our bunnies don’t chew much. Other rabbits might have easily munched through the plastic.

Putting Bunny, who has been free range for a long time, in a playpen wasn’t the easiest thing for us to do, but we knew it would be temporary. He actually adjusted quickly and was fine. The idea was to get them accustomed to living together in a small, controlled space. In a large room they would have been able to pick their own territories and live as rivals; the small controlled space ensured that there was no such option. They had to live together. 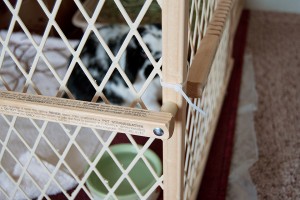 Bunny and Bailey now lived next to each other in the playpen. They could see and touch each other through the gate, but they couldn’t fight. I made sure to place their food bowls close to the middle gate, so they would have to eat next to each other. Each bun got to run in the living room a couple of times during the day. And every day for about a week we switched them. Bunny started out living in the left play area and Bailey on the right. The next morning, we moved Bailey to the left and Bunny to the right. Nothing else was switched, though, everything else stayed exactly where it was, so they had to share litter boxes and towels. They were excited and Bailey loudly thumped in protest the first couple of times we did that, but after a while they were both fine. They slowly got used to living together and sharing their territories.

After a week had passed, the dating began. I put both bunnies in one of the play areas and let them meet for 10-15 minutes at a time. They got treats and cuddles and I always ended the encounter on a good note. This went well. They humped each other at times, but it wasn’t vicious and they didn’t seem threatened by the other’s presence. Another few days passed before I removed the middle baby gate and let them meet for longer periods of time. At first I always sat near the big playpen with them and read a book, trying to interfere as little as possible. The biggest issue, Bunny’s refusal to groom her back, resolved itself when he suddenly groomed her head during one of those sessions.

For a couple of weeks we let the bunnies spend about 12-14 hours a day together. They often ate without the middle gate separating them, too. We even let them hop around the living room together for short periods of time and they were sharing everything without any aggression. In the late evenings they still got into quarrels, though, so at night we put the gate back in to separate them. Those quarrels didn’t seem like simple dominance-humping moments, so we liked to calm them down, distract them, and separate them for the night. After all, we had time! No need to rush anything.

The first night they spend together in the big fenced in area was quite nerve-wrecking. I got up every two hours to check on them and found some fur in a corner, but they were cuddling and I let them stay together. During the day, they got to roam the house for short periods of time, but they both always had to go back to the big fenced in area without the middle gate.

Once we felt comfortable that the bunnies would not fight, we gradually removed the gates. First only one corner, then the rest, and eventually the bunnies shared one litter box instead of having two. Now they are both free-range, completely bonded, and we have gone back to a happy family life, now including Bailey. The whole process took a little over a month and tons of patience.

This is not the conventional way to bond two bunnies, but these were special circumstances. 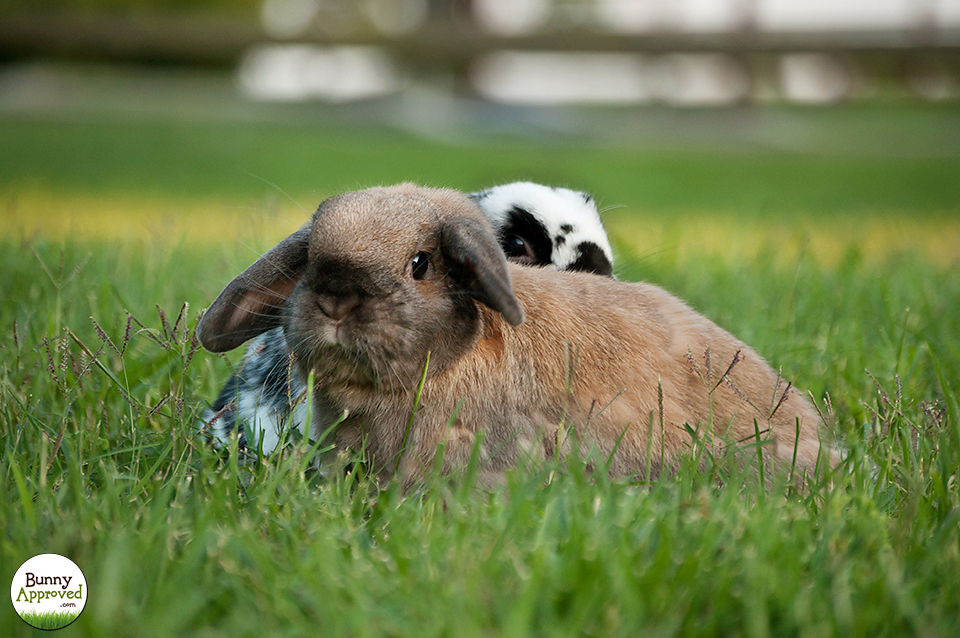