No products in the cart.
Home » Rabbit Hay Racks – What are the Options?

Rabbit Hay Racks – What are the Options?

Hay is the number one thing in a house rabbit’s diet (unless their human has a giant meadow full of fresh grass, which should be rare). Since hay plays such an important part in a rabbit’s life, it’s crucial to find hay racks or other solutions that help keep the hay dry and clean. The perfect solution will be different for every rabbit and depend on the living arrangements, too. Let’s take a look at a few of our options. 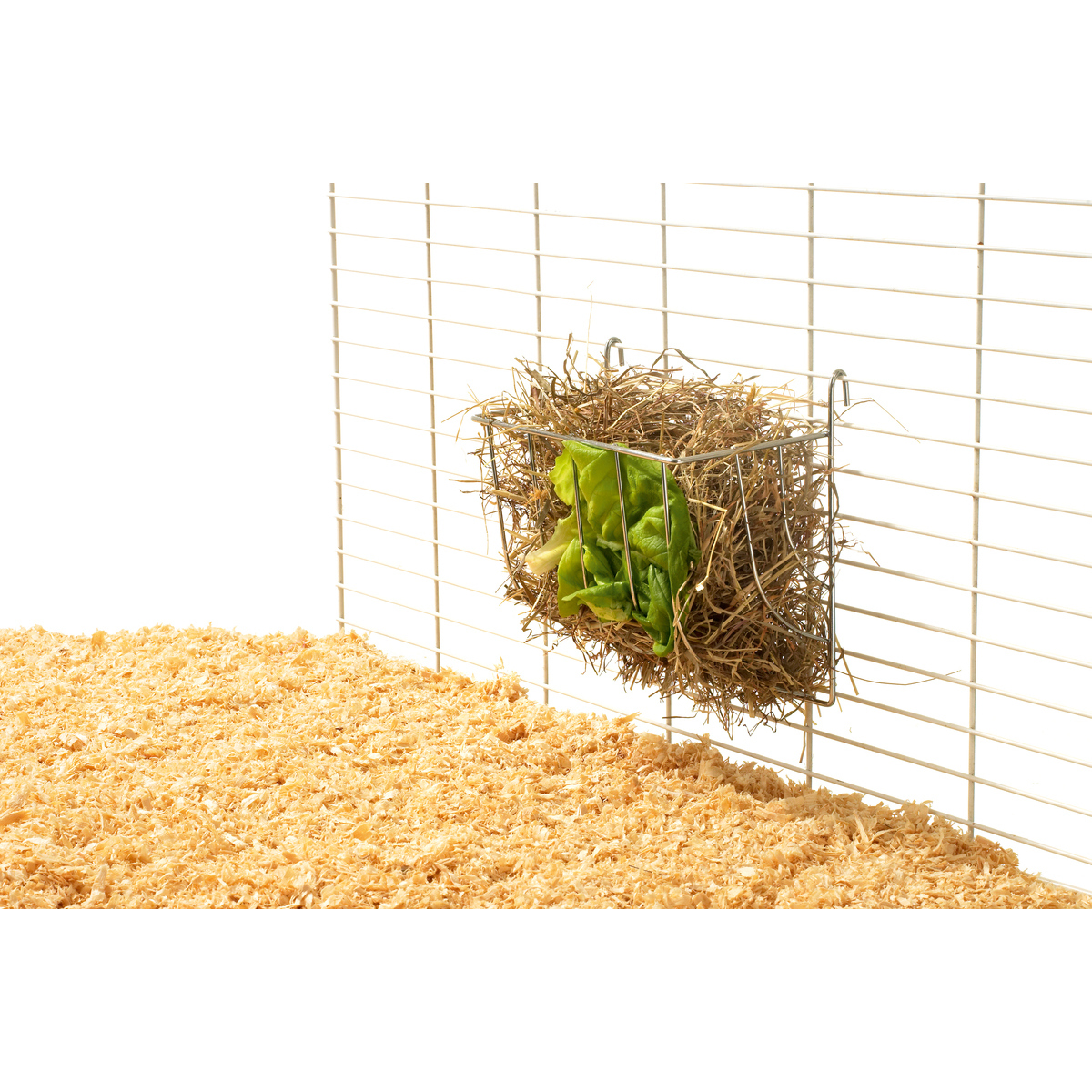 Metal Hay Rack
If the rabbit lives in a cage or has a kind of wire fence around its living space, a metal hay rack may be a great option. It is very inexpensive, can be hung up just about anywhere (even right in front of the litter box), and allows the rabbit to pull out as much hay as desired. Some rabbits may make it a sport to pull all the hay out at once and sit on it, but most will use the rack as intended. Metal hay racks need to be slim, so there is no chance that the rabbit will hop into it and get hurt. That also means you will probably need more than one of them to keep enough hay at your rabbit’s disposal at all times. Also be sure that the metal is spaced close enough together, so no bunny head can be pushed through and get stuck. Some of these metal hay racks can also be mounted to solid walls.

Wooden Hay Rack
The wooden hay racks need to be mounted or hung up, but if you have a solid wall or a wire fence/cage, that shouldn’t be a problem. Some of them will be open on the top, so if that is the case you need to make sure it’s slim enough for a rabbit not to be able to jump in. Most of them come with a flat wooden top, though, which keeps rabbits from jumping into the hay. Some of the tops are even wide enough for a rabbit to sit on. This is a great extra platform for some, and not so great for others… We had one of these for Bunny and he ended up peeing on the untreated wood, which meant we had to throw the whole thing out.

Some of these wooden hay racks are free-standing, which means they can be used for just about any living arrangement. Choose ones that are sturdy and can’t easily be pushed over or thrown around. Again, it’s important that a rabbit can’t push their head through the spaces. Untreated wood is the best option for bunnies, just in case they end up taking a bite here and there. If your bun loves chewing wood, this may not be the best option.

Toy Hay Racks
Some companies offer toys that hold hay and make eating it a bit more fun for those bunnies! Examples are the Living World Tree House Roll and the Veggie Ball, which can be filled with veggies or hay.

Re-purposed Hay Racks
Sometimes the best options are the things that weren’t intended to be hay racks… An old, clean sock or a linen pillow case with a few holes makes a great hay rack when hung up or simply placed on the floor. Those plastic grocery bag dispensers from the dollar store can be placed on the ground or mounted to the wall and then stuffed with hay. Also, there are wooden drying racks at places like Ikea (in the kids section) that could conveniently hold hay instead. The only downside with those is that bunnies might jump on them, which could make them topple over and fold together. Hanging baskets for flowers make great hay racks, too! Simply hang them up, remove the liner, and add plenty of hay. You can also place baskets or other containers on the ground and let your bun eat the hay out of them. 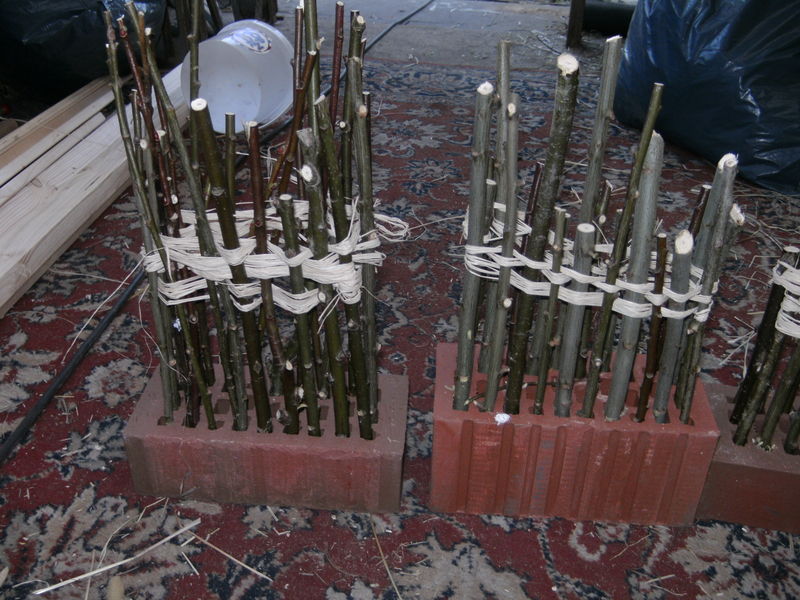 DIY Hay Racks
If none of the other options are suitable, why not make your own? Take an empty paper towel or toilet paper roll and stuff it with hay – it’s a fun toy and many rabbits love taking it apart and eating their hay that way. You could also use a brick a put sticks or bamboo in the holes all around it. Tie together with sisal string at the top. Add hay to the middle and you have a great hay rack!

And what do we do? We place the cardboard box our hay is shipped in directly on the floor and let the bunnies eat. The only time Bunny has ever peed in it was when we were moving. Luckily, there wasn’t much hay left at that point and we were able to switch to a new box immediately. Bailey has a hard time jumping that high, so she gets her hay in a small re-purposed plastic litter box instead. 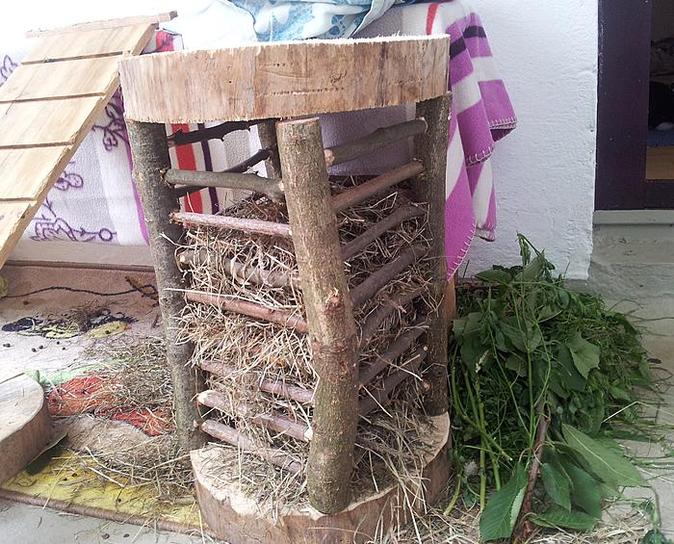 A few sticks and a handful of screws from the hardware store. Source: Kaninchenforum.de 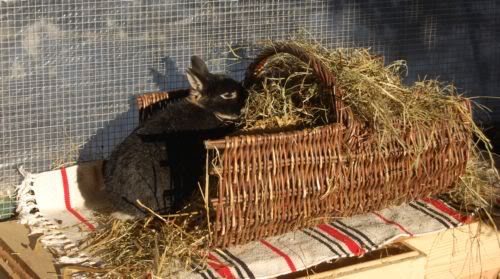 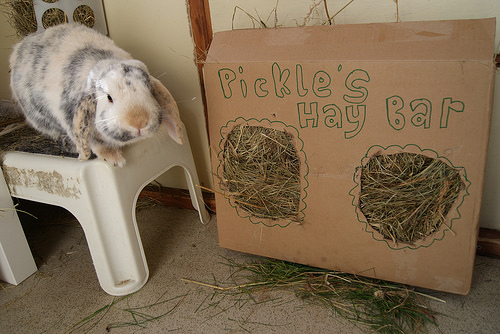 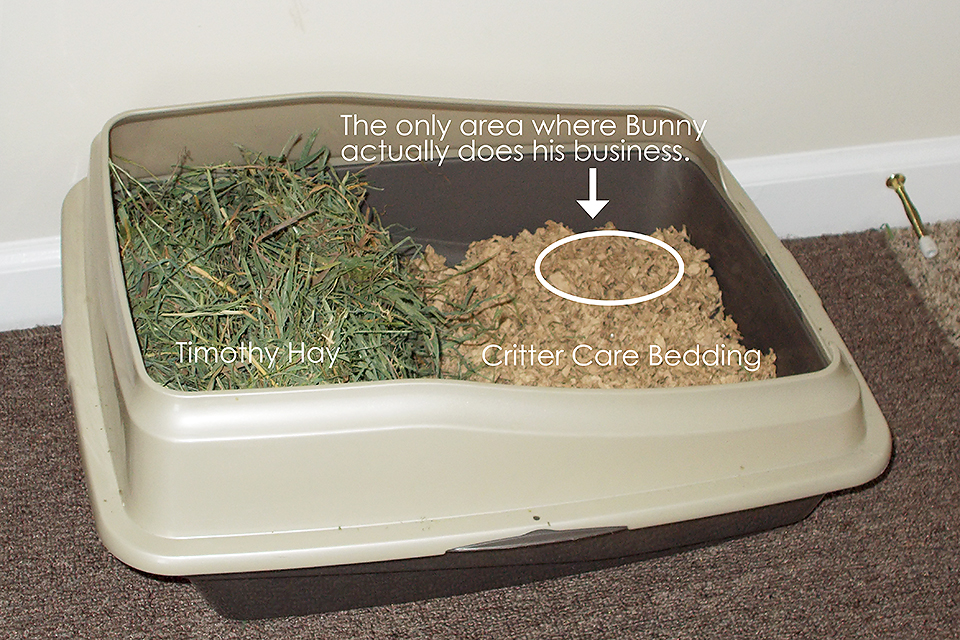 Bunny always has a bit of hay in his litter box. 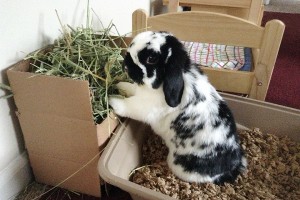 A cardboard box with one side cut out. There’s another box inside, so we don’t have to fill it all the way to the floor.

For more articles about rabbit housing, check out this link. If you have any great hay rack ideas to share, we’d love to hear about it in the comments below!