No products in the cart.
Home » Road Trip – Transporting Rabbits in a Car 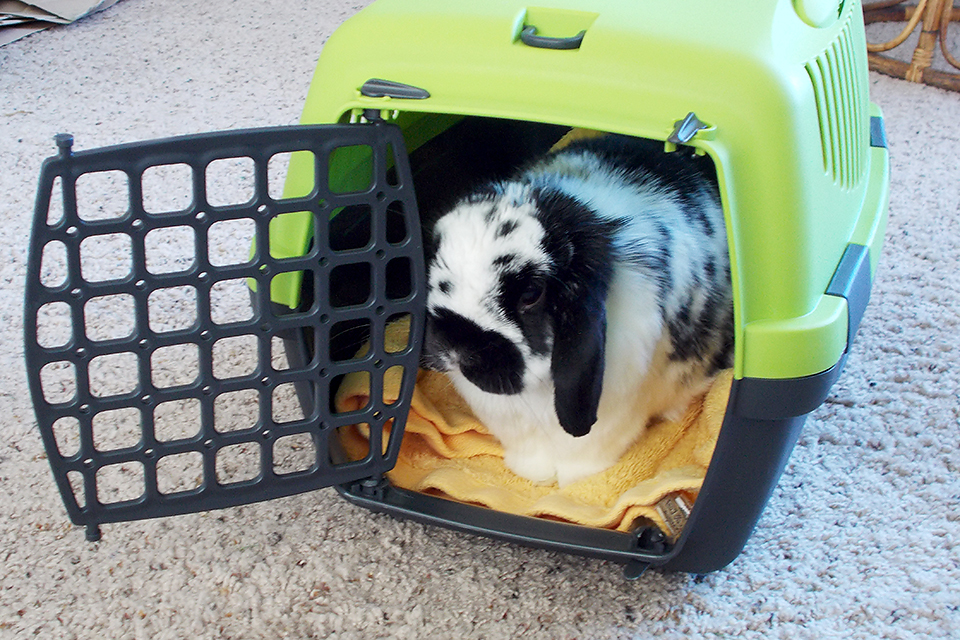 Sometimes transporting rabbits in a car is unavoidable. They may need to go to the vet for their yearly check-up, move to a new house, or simply travel with you for other reasons. For all of those cases, it is important to have a good carrier ready to go. There are two main factors that play a role when transporting any pet. First, we need to decide what kind of carrier to use and then we need to pick a place in the car where that carrier will sit. After all, we want our bunnies to be comfortable, but also safe. Here is what is generally recommended for rabbits:

There are a lot of other ways a rabbit may be transported. However, they all have risks/draw-backs associated with them. Here is what to consider when choosing any of these carriers/methods:

Open Baskets/Boxes: Rabbits can easily jump out and possibly injure themselves or end up in otherwise dangerous situations.
Cardboard Boxes: If a rabbit pees, the bottom of the box could get soaked through and may break. Also, a rabbit can easily chew through the material and escape.  If you do need to use a cardboard box in an emergency, make sure it has enough air holes all around.
Fabric Carrier/Bag: The fabric can easily be chewed and the bag itself is difficult to clean.
Cages/Crates: A cage or a crate is generally large and difficult to carry. It also doesn’t provide protection from drafts. In case of an accident or sudden stop small pets get thrown pretty far before hitting the wall, thus increasing the chance of injury.
Lap: Transporting a rabbit in someone’s lap or letting it sit on the seat can be dangerous for everyone in the car if the rabbit suddenly panics and jumps around. If the driver breaks just a little harder than normal the rabbit might get thrown around the car and get hurt.

Now we know what type of carrier is best, but where in the car should it be placed?

Every time we drove somewhere with Bunny, my husband and I had a little discussion about where the carrier should be. He thought the carrier should sit on the back seat, I thought it should be on my lap in the front seat, so I can reassure Bunny and pet him to keep him calm. Turns out, we were both wrong.

The ADAC, a German motor club organization similar to AAA in the US, performed several crash tests in 2008 and tested the safety of various ways to transport different pets. Using a car as transportation is always associated with a risk and that is the case for our rabbits as well. We don’t even have to get into an accident to risk the safety of our rabbits; a sudden stop can cause injuries as well. While no safety measures can completely eliminate the risk of injuries or death, there were several things that clearly stood out in their study and some of their results were truly surprising.

Front/Passenger Seat: Placing the carrier on the front seat in any way is dangerous for the pet, because the air bag will open when an accident occurs and destroy or severely dent the carrier while injuring the pet. In case of a full stop, the carrier might get thrown out of the window.
Floor of Front/Passenger Seat: While this option is better than the first one, because we are avoiding the airbag, many accidents involve rear-ending the car in front of us. In that case, the pet would likely get fatally injured.
Back Seat: The back seat seems like a good place to put the carrier, but the crash test showed that in case of an accident it would get thrown towards the front and could either injure the driver/passenger or go right through the window.
Back Seat with Safety Belt: Many carriers come with a little opening in the top that enables us to put a seat belt around it and safely secure it. This sounds like a great option and would prevent the carrier from getting thrown around. However, when the ADAC did the crash test, they found out that the force of the impact was too great for the carrier to uphold. It ended up getting completely destroyed and the animal dummy was thrown out anyway.

A crash at a speed of approximately 30mph; the carrier “secured” on the back seat with a seat belt. Image from ADAC.com

So what is the safest way to transport a pet in a car?

Based on the ADAC’s findings, a carrier made from hard plastic placed behind the passenger seat on the floor is the safest way to transport a pet in the car. The carrier should not be larger than necessary and the longer side of the carrier should be placed perpendicular to the driving direction, so that the pet only gets thrown a very short distance before the walls of the carrier get reached. If the carrier is too big to fit, another option is to drive a car with an open compartment, such as an SUV or station wagon, and lean it against the back of the back seats, with the seat belts fastened to further stabilize the seats. 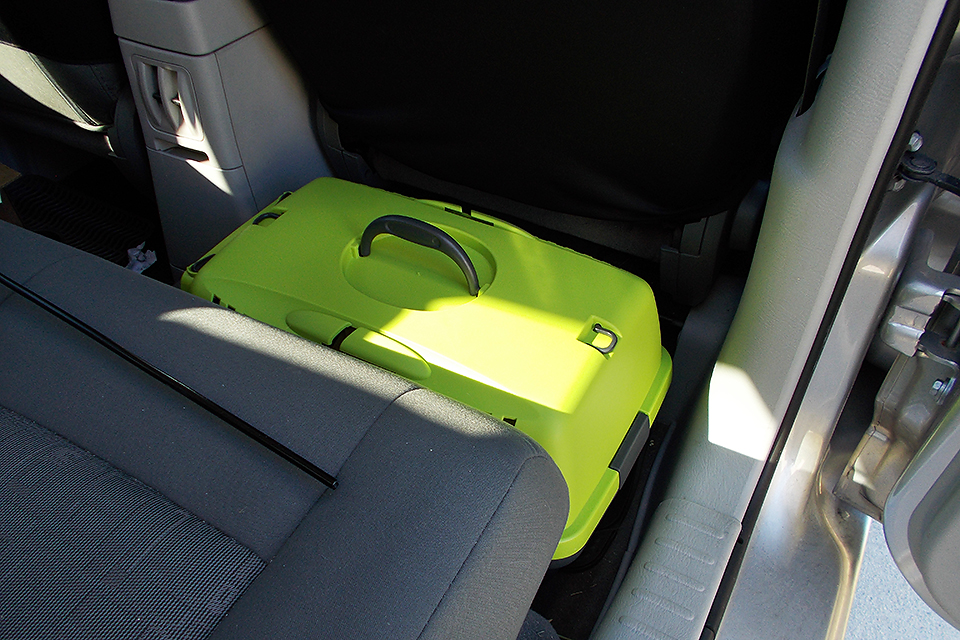 The safest option: Placing the carrier behind the passenger seat on the floor with the long side touching the seat. 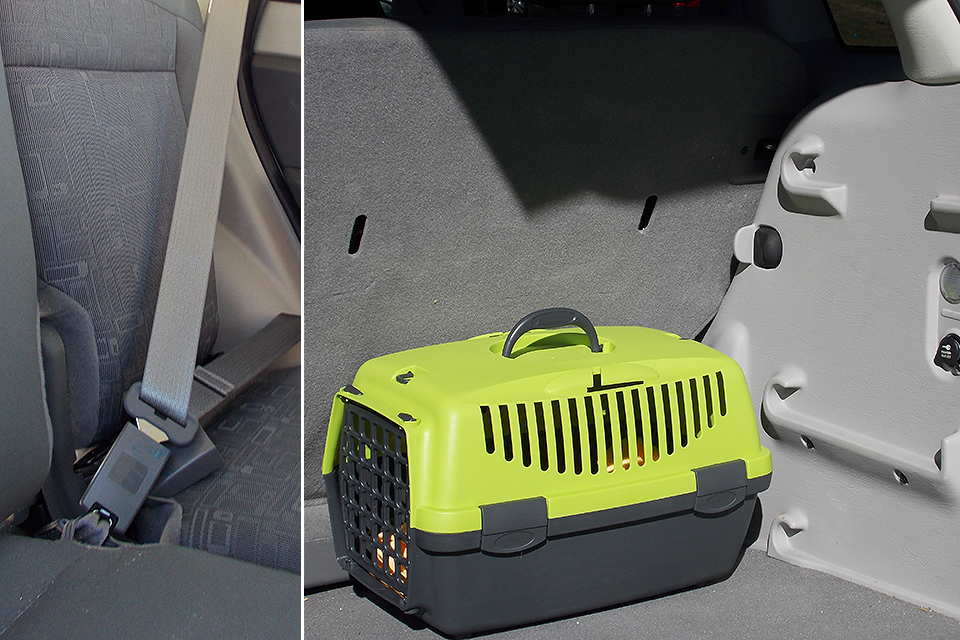 If the pet is too big or there is no room behind the passenger seat, the carrier can also be placed in the open compartment in the back. The carrier touches the back of the seats with the long side and the seat belt is fastened to further stabilize the seats. Bunny’s carrier is available here.

You can view the whole video here (see 1:46) or read about it here. Unfortunately, there was no English translation available, but the images speak for themselves.

When a rabbit is in the car, it is also a good idea to keep the music off or quiet, the temperature steady and comfortable, and drafts away from the carrier. Pre-heat or cool the car before starting any trip and never leave any pet inside a parked car, no matter how mild the temperatures are. Keeping vegetables available helps hydrate those bunnies on a longer trip. Also offer hay at all times.

In the end, everyone has to decide for themselves how to transport their pets, but we hope our research helps make an informed decision.