No products in the cart.
Home » Rabbit Communication – No Words Necessary 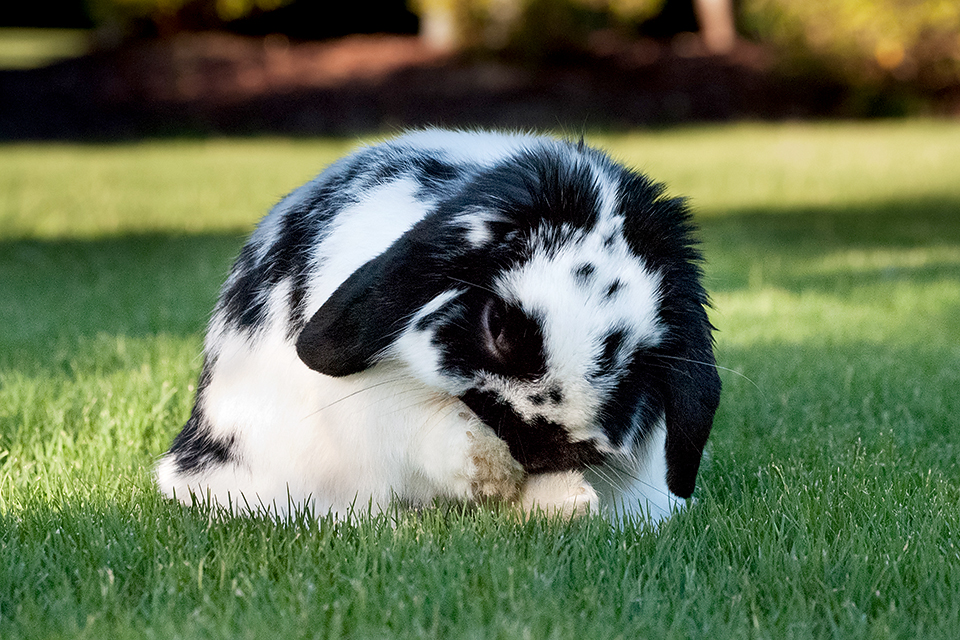 Even though animals can’t talk, they are generally still more than capable of communicating their feelings. Especially once we get to know our pets, it’s easy to tell from their behavior, expressions, and body language what they want or don’t want. Rabbits are no different. In fact, sometimes Bunny is so blunt and un-subtle (and yes, I know that’s not a word), it’s quite comical and cracks us up. Let’s take a look at some general and specific ways rabbits communicate.

Teeth Grinding/Chattering: We all strive to hear that sound when it’s cuddle time. Teeth grinding indicates comfort and overall well-being. If you hear this sound at other times, it may also indicate pain.

Standing up on the Hind Legs: The rabbit wants to see what is going on around him. This can be out of curiosity or to make sure the area is safe. Indoor pet rabbits may also stand up when they want to see items placed up high in the house, ask for a door to be opened, or beg for food. 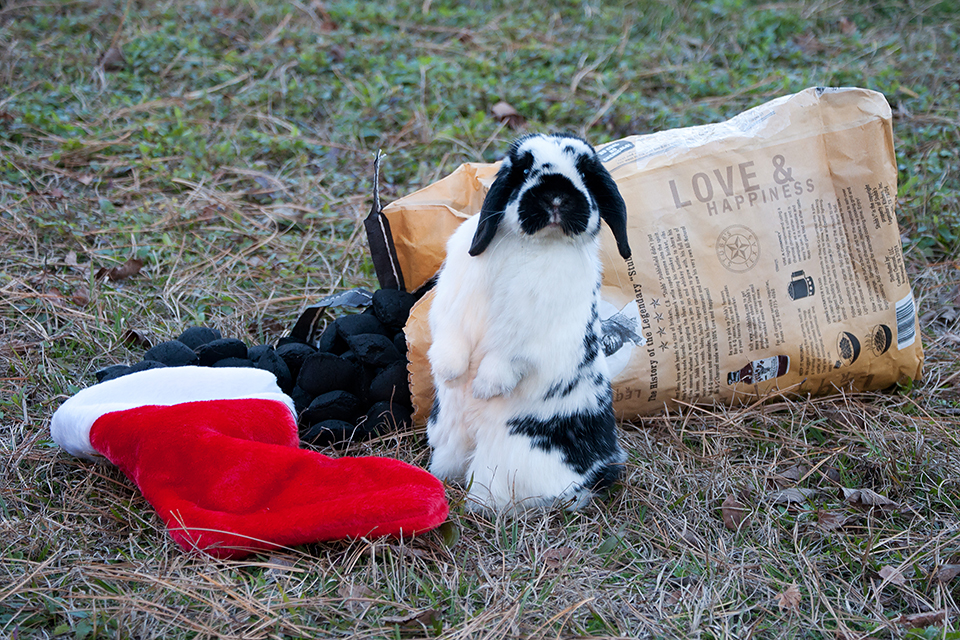 Where is the noise coming from? Ahhh. Camera clicking.

Nudging: Whenever the rabbit hops over and nudges a person with the head, the human better start paying attention. The rabbit may want to play or receive pets. Nudging other rabbits (especially with the head lowered) is a request for a grooming session. This may be followed by a pushing away, which indicates the rabbit had enough. Not sure we got the nudging part down yet, because every time we do it to Bunny he just hops away…

Licking: People used to think that rabbits would lick them because of a salt deficit. Today licking is generally seen as a sign that the rabbit considers the human part of the family and therefore needs to be groomed just like another rabbit would be groomed. 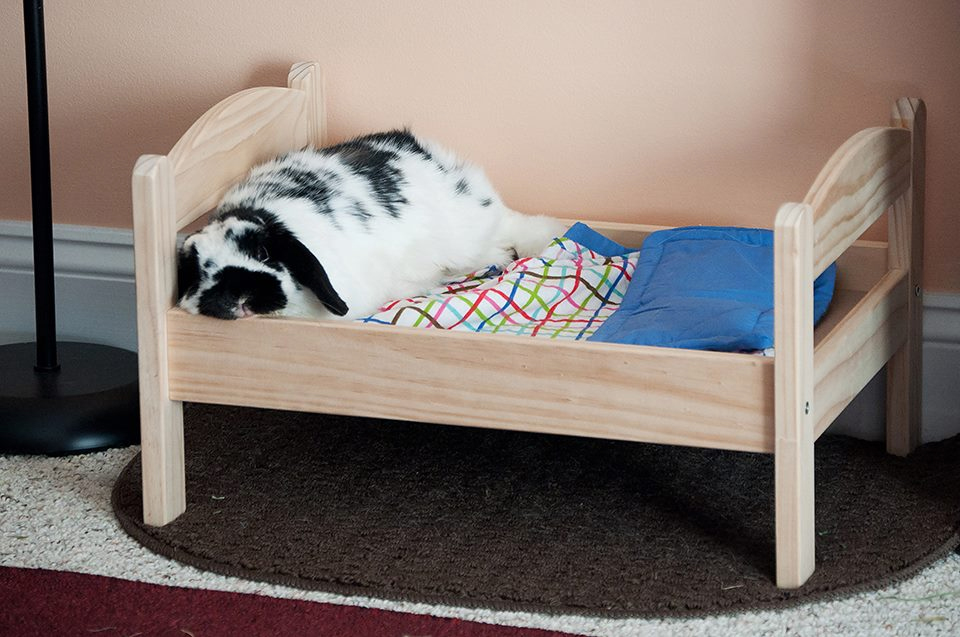 Bunny all flopped over on his bed.

Flopping Over: If a rabbit flops over on its side  to sleep or simply rests with the feet all stretched out, it feels safe and secure. As much as you want to go over and cuddle, it’s best to let the rabbit sleep to confirm the feeling of safety.

Humping: While humping certainly indicates sexual maturity and readiness to mate, it can also be a display of dominance. One rabbit, no matter if it’s male or female, will hump another rabbit to confirm their dominance or to establish it during the bonding process.

Chinning: Rabbits have scent glands under the chin. Rubbing the chin on things/people leaves a bit of the scent and alerts other rabbits that they are entering a claimed territory. So everything that gets chinned is claimed as the rabbit’s property. Humans included.

Marking with Urine/Feces: Rabbits may mark their territory with bits of poop or small amounts of urine to warn other rabbits, especially when a new rabbit shows up. This behavior is most prominent in rabbits that aren’t spayed/neutered. After the bonding process and/or getting fixed, this behavior should stop.

Sudden Flight/Escape: When a rabbit senses danger, it won’t sit around to confirm, it will immediately race away and hide. This behavior may be triggered by a sudden sound, smell, or movement. If that happens, let the rabbit calm down on its own. You can try reassuring the rabbit by calmly talking and offering food, but let it come to you on its own to prevent further stress.

Hopping Away: After a cuddle session your rabbit may get up and hop a few steps away. That means it had enough and while it still wants to be near you, it doesn’t want to be touched anymore.

Rummaging: Rabbits often love to rummage through clothes, towels, or blankets on the floor. In the wild, they constantly dig; in the house, fabric is the next best thing. Bunny has a couple of designated large cotton towels and will make a nest out of them frequently. 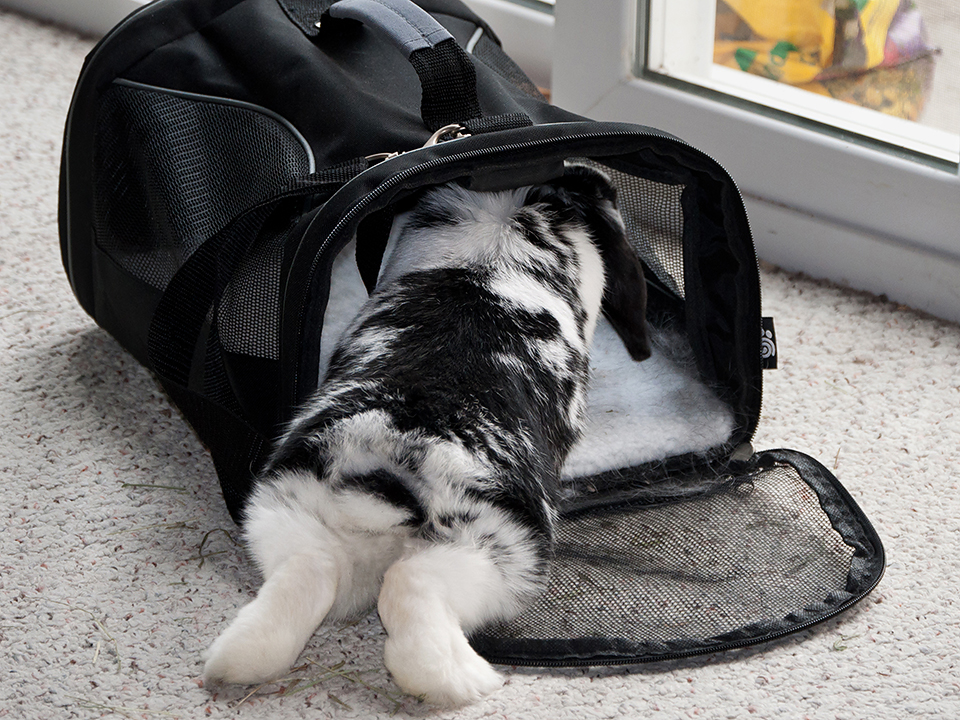 Bunny is inching into the carrier, carefully assessing the situation.

Binky/Zig-Zag Jump: When rabbits run away from enemies, they often hop in crazy zig-zag motion to get away. When they are happy, excited, or playful, they will do the same thing to express those high spirits. It’s very amusing to watch and generally known as a “binky”.

Thumping: Thumping can mean different things at different times. Your rabbit may be scared – then the thumping alerts the rabbit’s family of danger. Your rabbit may also be very angry and aggressive and warn you or others not to come closer. House rabbits may thump to demand food or cuddles.

Ducking: When a rabbit ducks and makes itself flat, with the ears pressed against the body and the eyes wide open, it is highly uncomfortable. During the bonding process, it means that the rabbit submits to the other rabbit. If a rabbit does this while being sniffed by another animal or touched by a human, it really doesn’t want the attention and you should let it be and/or remove the other animal.

Freezing: Sometimes a rabbit will simply freeze and breathe heavily, with the eyes wide open and the head held high. That means it has sensed danger and is assessing the situation. House rabbits may sit motionless and stare at the human when they want attention/food.

Growling/Hissing: The rabbit is extremely angry. Better stay away!

Ears Forward: When the ears are turned forward, the rabbit is curious and listening while assessing a new environment or situation.

Grumbling/Humming: If your rabbit hums or grumbles, it may be ready to mate. Some rabbits may also express excitement with a low hum.

Squeaking: Baby rabbits may squeak to call their mothers.

Screaming: This is a sound no one wants to hear: The high-pitched scream of a rabbit. It signifies intense pain or fear and even mortal danger. 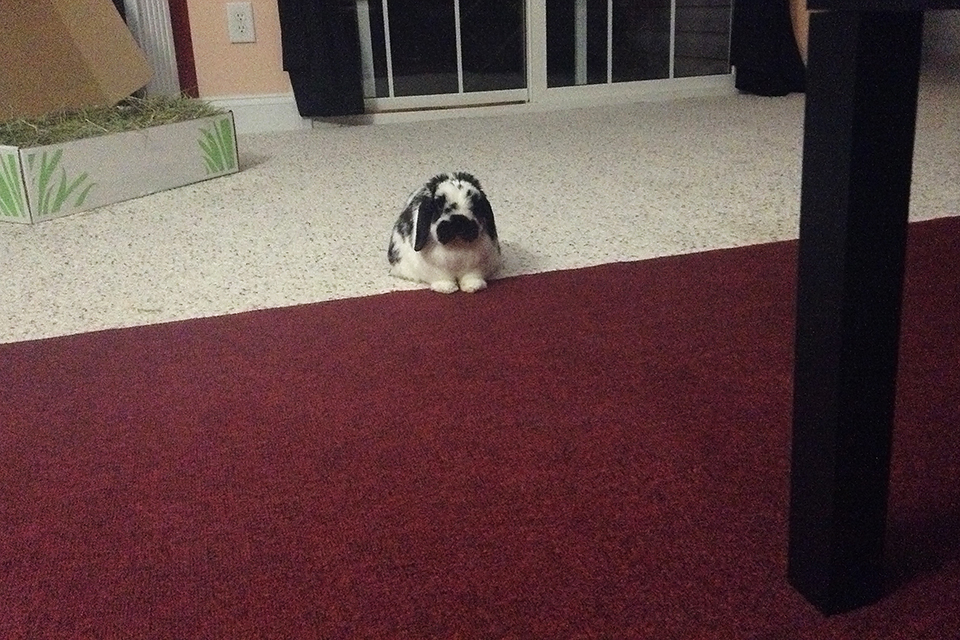 The creepy “I want food” stare.Bunny’s got that one down.

Rabbits certainly have no problem at all getting their point across – we humans just need to pay attention. They may come up with different ways of expressing themselves as time goes by and some of the above mentioned meanings may differ from rabbit to rabbit. Bunny’s newest trick is to sit motionlessly by his food bowl looking starved and pathetic until we notice him and give him food. It works every time. Some rabbits are more pushy than others, too. Bunny doesn’t beg outright, he just hops by nonchalantly and patiently waits for us to notice him and give him a treat. Other rabbits may nudge a human’s legs and stand up to demand food. We’d love to hear your rabbit’s unique communication skills, so comment away!