No products in the cart.
Home » Life with a Free-Range Rabbit

Life with a Free-Range Rabbit

Our Bunny is a free range rabbit. Which means he has no cage and he basically has access to the whole house at all times, even when we are out or asleep. Just like a cat. In fact, he has a litter box intended for cats in a corner in the dining/living room and unless the way from the bedroom to the litter box seems too tiring, he pretty consistently uses it.

There are certain habits we had to change in order to accommodate Bunny’s free-range life. We don’t throw clothes on the floor any more, because Bunny will make a nest out of them by pulling them around with his teeth. We learned that the hard way. Lots of tiny holes in jeans are not fashionable. That also means we can’t fold laundry on the floor without Bunny taking over. We don’t leave anything plastic or potentially dangerous (drier sheets!) out. Grocery bags cannot be left on the floor (he’ll find the carrots!) and items such as our laptop or vacuum cleaner have to be put away immediately after use. We have no plants in the house and fake-plants are high up. Those are small changes, though, that we don’t mind making.

When we adopted Bunny he had a tiny cage and was obviously not used to spending much time outside of it. For the first couple of weeks we let him out whenever we were home, awake, and had time to watch him. He was only allowed to be in the living/dining room, with access to the kitchen and the one bathroom if we forgot to close the door. At that point two things became pretty clear:

1. Bunny never left the carpeted area of the house. That means he does not go into bathrooms or the kitchen.

2. Bunny mainly spends his “free time” sleeping in his favorite spots around the house. He never chewed carpet, books, furniture, or anything for that matter. Except for cables.

This paper has been on the floor for over a week. Bunny has too much fun with. We’ll put it away some other time.

We saw no reason why Bunny ever had to go into his cage, especially once we litter box trained him. Of course, after two weeks you cannot know an animal (or a person, for that matter) well enough to trust them at all times with your entire house. So we started slowly. At first we left Bunny’s cage open while running small errands. Then we let him stay out over night. Eventually, we left the door of his cage open even when we were at work during the day. And when Bunny passed all those “tests” without any incident at all, we threw the cage out.

At first we only rabbit-proofed the living/dining room area. Bunny naturally took every chance he got to hop into the bedroom and hide under the bed, though. We kept on bringing him back into his dedicated area until one day we couldn’t find a good enough reason anymore why he had to leave. He just wanted to sleep under the bed. Why not?! So we rearranged some furniture to hide the few cables in that room and now it’s safe for Bunny. He even has a couple of toys in there. 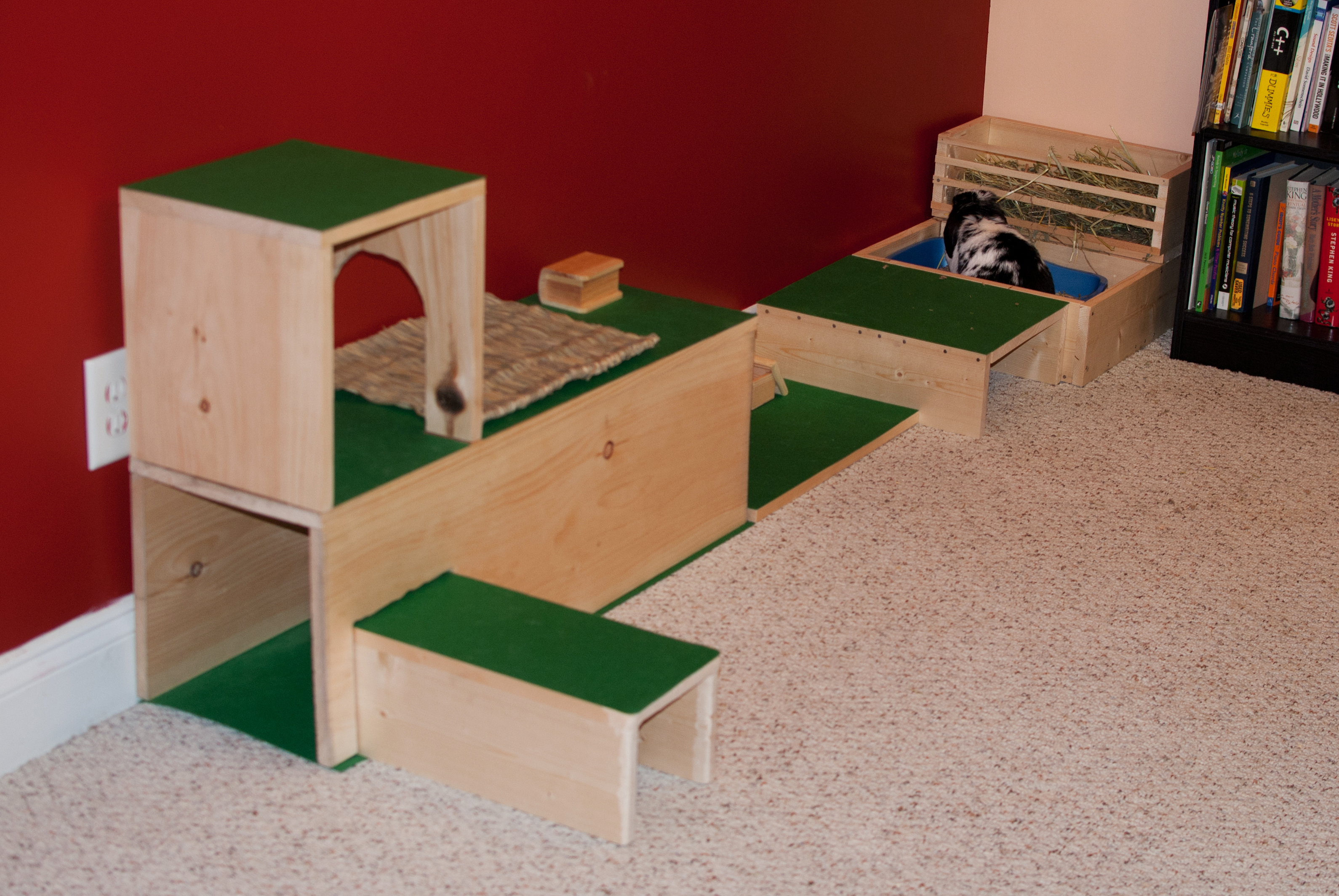 Bunny’s current castle made out of wood and felt (to prevent slipping).

We often joke about the whole process and how Bunny slowly, but persistently took over the house. He was as restricted as he could be at first, but convinced us to let him have almost complete freedom in a very short time.

We now had one room with a baby gate in front of it, because it has too many computer cables to hide. There were 2 bathrooms and the kitchen Bunny didn’t go in because they had no carpet. He had access to the bedroom, living/dining room, the hallways, and one office (which he never entered anyway).

*UPDATE: In 2014 we added a second rabbit to our family. Bailey turned out to have a similar personality, bonded with Bunny, and they both live free-range in our home.*

The key to Bunny’s free range life is the fact that everything he could destroy or that could harm him is not accessible to him. We are very lucky, because he has a personality that doesn’t require us to remove things like books or carpet from our rooms. If you want to attempt letting your rabbit be free-range, you might have to secure certain rooms or areas more thoroughly than we had to. Your bun might show an interest in your trash can or pull the toilet paper down in the bathroom. You might have to make sure no windows are left open and accessible. You might even have to sacrifice your favorite Papasan chair or put it in a different room.

While Bunny doesn’t have a cage anymore, that doesn’t mean he has nothing to call his own. It is important to us that he has his own furniture and spots where he can hide for as long as he wants without getting disturbed. His favorite spot is under our bed, but he also has his own little bed in the living room, a wooden “castle” we built for him in the dining area (he previously had a cardboard box castle), and toys, a towel, and a box of hay in various spots. He actually has quite a few logic and chew toys, because we cannot expect him to hop around the house all day in a circle and do nothing. Having various things that are his and that he can do what he wants with means that even if he has certain urges, our furniture, baseboards, walls, and carpets are safe.

A free-range life works really well for us, but not every rabbit can be left out without supervision, even in a rabbit-proof house or room. Some rabbits need a (big!) cage/fenced area for their own safety. You might find that you can trust your rabbit in one room, but not another. Luckily, baby gates are cheap.