No products in the cart.
Home » Eat Like A Rabbit Series – Fennel 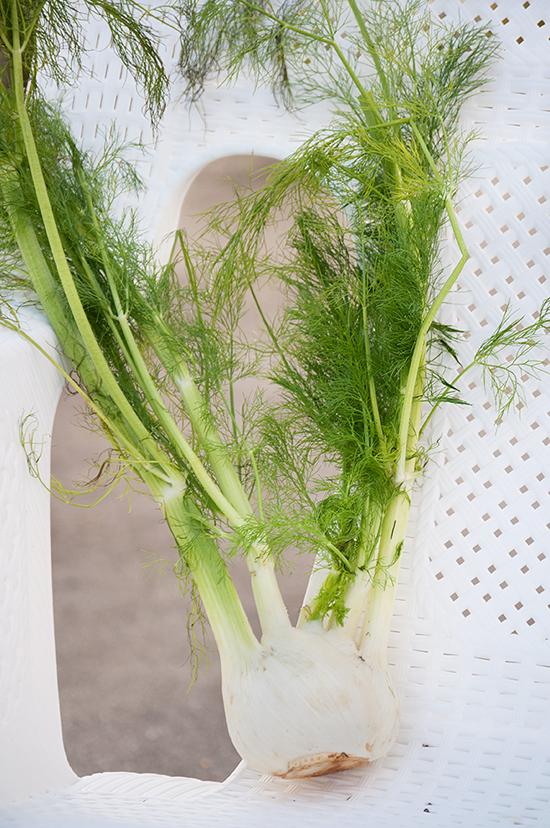 The bulbs are much larger between fall and late winter, but here is a May fennel from the grocery store.

One of Bunny’s favorite things to eat is fennel. Unfortunately, it is not particularly cheap, so we want to make sure that nothing ever gets wasted, especially since it only lasts about 4-5 days in the fridge  And I don’t know about you, but besides from taking a small bite while preparing it for Bunny (and my childhood rabbits back then), we’ve never cooked anything with fennel in it. So let’s see what we can do with it!

First of all, fennel is a perennial plant that originally comes from the Mediterranean. While researching it, it wasn’t immediately clear whether fennel is an herb or a vegetable – the white bulb at the bottom can be eaten raw or cooked, which sounds more like a vegetable, but the stalks and feathery green leaves are used as spice or for tea, which sounds more like an herb. Also, fennel is known for its medicinal benefits, which again points towards it being an herb (and it is indeed an herb).

The great thing is, both humans and rabbits can eat the entire fennel, bulb and stalks. There is no need to ever waste any of it. It’s slightly sweet, with a hint of licorice taste to it, and crunchy. For Bunny, we simply slice the bulb and cut off the stalk, wash both, and feed it to him. Fennel is often confused with anise, a different herb, and sometimes even wrongly listed as anise in grocery stores.

Personally, I know fennel tea as something I would get as a child when I was sick. It is said to help with respiratory tract infections, coughs, bronchitis, and digestive issues such as gas, heartburn, diarrhea, colic in infants, and loss of appetite. Apparently, fennel can also increase the sex drive in women, promote the flow of breast milk, and ease menstruation and the birthing process – who knew!? Fennel powder was even mentioned to be a good poultice for snakebites and the Romans believed it to improve the sight. Many mouthwashes,  toothpastes, and breath fresheners contain fennel – in fact, in some countries people will chew the seeds after a meal for a fresher breath. I could not find any scientific evidence that would definitely confirm all of these benefits, though.

Here are some more good news about fennel: 1 cup of raw fennel has about 27 calories.  It is a good source of  Niacin, Calcium, Iron, Magnesium, Phosphorus and Copper, and a very good source of Dietary Fiber, Vitamin C, Folate, Potassium and Manganese. It virtually has no cholesterol, either.

Fiber is the main reason why rabbits need to eat a lot of hay. So if you are worried that your rabbit isn’t eating enough hay, and therefore not getting sufficient amounts of fiber, fennel is a great regular addition to the diet. As with all herbs and pretty much everything, too much of a good thing can be bad. So while the list of possible benefits is large, let’s keep the amount of fennel for us humans and the bunnies to a sensible amount. We feed Bunny about one stalk a day and a slice of the bulb on top of it. After 3-4 days, the fennel is gone and we may buy more a week or two later.

So how do we prepare fennel in a way that is tasty for us humans? Try chopping up some of the leafy greens and adding them to a stir-fry or salad. The bulb can be chopped up and roasted with other vegetables or mixed in with a salad as well. The stalks can be eaten raw with a dipping sauce or added to soup instead of celery. Fennel goes exceptionally well with any kind of fish. Here are two actual recipes: 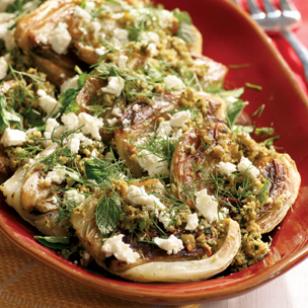 If you were looking for something unique to bring to the next potluck party, here you go! We found the image and recipe on the Eating Well website and tried a modified version of it out last week. The original recipe calls for olive tapenade, feta, and mint. Everything is placed on top of the fennel bulb slices and roasted in the oven. We lightly brushed some olive oil on the fennel and used pesto, feta, sliced grape tomatoes, and mint on top. And a pinch of cheddar cheese. It’s as good as it looks!

It also tastes great to simply brush the fennel slices with olive oil and roast them by themselves for 30-40min. until they start to caramelize.

This one is going to sound a little weird. Simply use your favorite homemade-pizza-dough recipe or get one from the grocery store. Add sour cream instead of tomato sauce as the base. Now sprinkle thinly sliced fennel bulb on top as well as some of the chopped up leafy greens. And bits of chicken sausage. I admit that we haven’t tried this, but many people swore it tastes great. Maybe YOU can try it out and let us know what you think. What we have tried is the following: Caramelize thinly sliced onions and fennel bulb in olive oil. Then add it to the pizza crust topped with a pesto sauce, sprinkle with cheddar cheese, and bake. Tastes awesome!

The good thing about this is, we can now give the cashiers at the grocery store who ask us what in the world we do with fennel a better answer than “Not sure, our rabbit likes it.” We hope you enjoyed the post and will add fennel to your list of groceries to buy. Or maybe you have a great recipe to share yourself?