No products in the cart.
Home » Eat Like A Rabbit Series: Celery Root 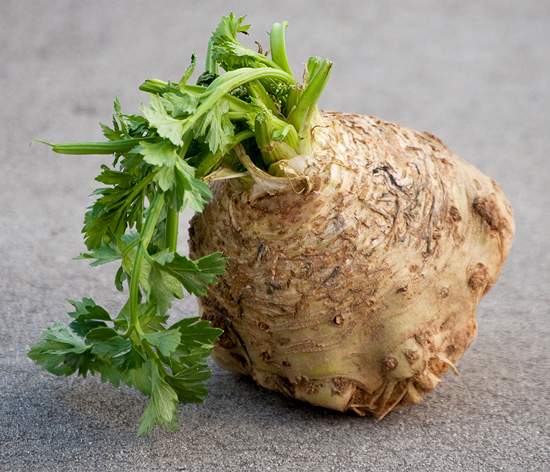 Since Bunny eats a variety of 6-8 different rotating vegetables every day, we end up with unusual produce in our fridge. Sometimes it’s more than little Bunny can eat before it goes bad, so we are constantly hunting for new recipes that incorporate those vegetables. Our last find was rutabaga. Our newest find is celery root.

Granted, celery root does not look very tempting. It has a brown lumpy skin and is light yellow on the inside. It also smells pretty much exactly like the celery we all know, which is where it received its name from. Celery root is also known as ‘celeriac’ and it originally came from the Mediterranean. Even though it belongs to the family of root vegetables, it has very little starch and is therefore a healthy option for our rabbits as well as us humans. According to the label ours come with, they have about 45 calories per cup and French chefs swear by them. Nice!

Celery root is low in cholesterol and saturated fat and is found to be an excellent source of riboflavin, calcium, Vitamin B6, magnesium, phosphorus, and potassium, Vitamins A, C, and K, as well as dietary fiber.

To prepare it for us or Bunny, we simply peel the skin off and cut the root into pieces. Bunny enjoys the raw root and also loves the green stalks and leaves. The great thing is, celery root can be eaten raw or cooked and used instead of ‘common’ celery in most recipes. Even the stalks and leaves are edible for us humans, too! Simply chop them up and use them in soups or sauces as a tasty spice. The raw root can be grated or sliced and added to salads or eaten with a dip. Personally, I don’t like eating celery at all, but celery root tastes really good once you get over its appearance, even completely raw. While the leaves are best used within the first week, the root itself stores for up to a month in the fridge and several months in a root cellar. Here are two recipes centered around celery root:

Simply peel and cube 3 large potatoes as well as 1 celery root. Boil the potatoes in salty water for 10 minutes before adding the celery root. Drain once they are both tender. Place in a bowl and add milk and unsalted butter to taste before mashing it all up into a puree.

We found the following recipe online and tried it out this past weekend. It tasted amazing with a side of French Baguette, so we decided to feature it here. Our version did not have the cayenne pepper, we used a random wine we had in the house,  and substituted the cream with regular milk. Make it your own!

Melt butter in heavy large saucepan over medium heat. Add celery roots, onions and celery. Sprinkle with salt and pepper. Cover and cook until tender, stirring occasionally, about 20 minutes. Add garlic, celery salt and cayenne pepper and stir 1 minute. Add vermouth and boil until most of liquid evaporates, about 8 minutes. Add stock. Bring to boil. Reduce heat and simmer until vegetables are very tender, about 15 minutes. Puree soup in blender in batches until smooth. Return to saucepan. Add cream. Simmer until thickened to desired consistency, about 5 minutes. Ladle soup into bowls. Sprinkle with chives and serve.

As almost every ‘firm’ vegetable, celery root also tastes fantastic when roasted in the oven with olive oil and spices, especially when mixed with other vegetables, such as potatoes, broccoli, zucchini, bell pepper, carrots, and more. Neither one of us ever considered celery root before, but now that we know what it tastes like, we will integrate it into our diets for sure.

We hope you enjoyed this post and will look out for more in the near future! If you have any tasty celery root recipes to share, comment away below.