No products in the cart.
Home » Bunny Logic 101 – Rabbits are Smart!

People make fun of us all the time for having a rabbit. They assume that Bunny is a cute, but basically stupid animal without personality that is unable to form any type of relationship with humans. They think that he can’t do much aside from wiggle his nose, chew furniture, and soil the carpet. When these people are invited into our home and meet Bunny, they are surprised. Wow, he uses a litter box! And he has toys! And look, he’s following us around and asks for attention! At that point, Bunny usually gets compared to a cat or a dog. And he’s won them over.

Rabbits are, in fact, quite intelligent creatures able to memorize, solve problems, and react to cues. Don’t believe me? Every morning at 6:30am when our alarm clock rings, I hit the snooze button. The second time it rings, I hit the snooze button again. Up until now, Bunny is nowhere to be seen. The third time the alarm rings, Bunny comes running and is at my heels before I can even turn the alarm off. We then race to the kitchen (he usually wins, even though he circles my feet all the way) and he patiently waits for me to give him a carrot out of the fridge. This happens every morning and shows that Bunny can count and remembers a routine. 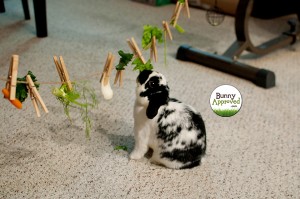 We absolutely love challenging Bunny and keeping him entertained by providing him with logic toys. A logic toy, by our definition, is any toy, store-bought or handmade, that requires problem solving to get a reward. People often admire Bunny for his skills and sometimes we hear people say that their rabbits aren’t as smart. Even though we are certainly wearing our love-goggles when it comes to him and think he is amazing, we don’t think he’s inherently smarter than other rabbits. He just had the opportunity to learn.

As we have mentioned before, when we adopted Bunny he was used to spending most of his time in a cage so small that he was forced to sleep in his litter box. He had no toys and nothing at all to do in there. When he moved in he quickly became a free range rabbit and a part of the family.

We strongly believe in education and learning, so we started introducing toys to Bunny that required some action on his part to get to the treat. After all, improving skills and using the brain isn’t just healthy for humans!

The first toy was sent to him by his European “grandma”. It was a treat ball and there was no learning curve associated with it. He understood it immediately and loves it to this day. His enthusiasm for it encouraged us to find more toys like that.

While shopping at a local craft store, we spotted some unfinished wooden boxes that Bunny would physically be able to open. One of them had a lid with hinges, another one a plain lid, and a third featured pull-out drawers. We took them home and started off with the easiest one. As easy as the task seemed, Bunny had no idea what to do, but he excitedly hopped around the box, smelling the carrot inside. We kept on encouraging him whenever he tried to open the box (“Good job, Bunny!”) and opened the lid briefly whenever he gave up. The first few times we played with him, we ended up lifting the lid slightly and letting him do the rest, so that he would understand that an upward pushing motion with the head is required to open the box. Whenever he lost interest, which was very quickly at first, we stopped for the day. Once he got the hang of the first box, we introduced the other two. It took several days of sessions like this, where we helped Bunny accomplish the task, for him to consistently and intentionally open the boxes.

Opening a box like that isn’t the most difficult thing in the world to do, even for a rabbit, but Bunny never had the opportunity to give it a shot, so it was difficult for him. We ended up gluing all the boxes next to each other on a wooden board, so that they would be stationary. Bunny still checks them regularly every day, because we hide vegetables in them at random times.

As this example illustrates, Bunny wasn’t always as smart as he is now and he wasn’t always the fastest learner, but he had the potential to be. I strongly believe that every healthy rabbit can learn what we taught Bunny, step by step, and even more. If the rabbit is physically able to perform a task, it can learn it.

Anyway, the next toy Bunny received was the Snack Board. Instead of a pushing motion, he now had to put the lids in his mouth and move them out of the way. It took a while to convince him that he should be doing that. Bunny doesn’t like putting anything aside from food (and wires, apparently) in his mouth. His gentle nudging and occasional digging motion didn’t help him get the treats, though. We kept on encouraging him, showed him how the lids moved, and helped him along the way. Again, it took a while, but Bunny eventually understood. The video shows one of the early days of Bunny playing with the toy. Now he’s so fast it’s almost as if we gave him the treats outright.

Next, we bought him the double-sided Board Game that required him to slide a piece out of the way to get to the treat. Bunny would either have to push the piece with his head or dig and move it away. The tricky part was that he had to switch between those two depending on the direction the piece could slide. Bunny tried picking the piece up, which didn’t work. He hopped around the board, giving each piece a good try. In desperation, he made the digging motion, which we rewarded with encouraging words. We also kept on sliding the pieces back and forth to illustrate the mechanics of the toy. By accident, he would get to one or two of the treats on his own and we’d help him with the rest. We kept on showing him every day until he got the motions down and eventually, he even understood when to nudge and when to dig.

The Brain Train Cube has been the most challenging so far for us. You can clearly see a difference between the video from May 2013 and July 2013. It’s also quite apparent that Bunny knows what he’s doing and that the cubes don’t just accidentally come out.

Bunny now has a variety of other logic toys. He can get to hidden treats by pushing and pulling in all directions, digging, picking up, and spinning parts of the toys in front of him. We are constantly on the lookout for more challenging toys for him. Unfortunately, rabbits are often underestimated.

Anyway, the reason why I am writing this is to illustrate that Bunny’s skills are learned and that he acquired them after months of training. Not only can he solve familiar logic toys, but he seems to be able to take what he knows and apply it to new situations. Whenever we give him a new toy now, he doesn’t start from zero; he can use his old skills and develop new strategies. It’s quite amazing how he turned from a rabbit that had no idea how to open a box to a rabbit that can handle unfamiliar situations with a plan.

We have no doubt that training Bunny’s brain and giving him tasks to accomplish has greatly improved his overall well-being and given us an opportunity to spend quality time with him. Admittedly, there have been a couple of issues since. For example, the timed food dispenser we bought for Bunny was no match at all. Instead of waiting for it to dispense food on days when we were out longer than usual, he’d just open it whenever he wanted to. It was just another toy to him. One day he chewed through a backpack to get to the banana inside, which was supposed to be my husband’s lunch. After all, how could he know that this wasn’t another one of our challenges?! Clearly, we think these issues are absolutely hilarious.

Not only are rabbits intelligent, they are also very social animals and will demonstrate affection, jealousy, anger, happiness, sadness, fear, dominance, satisfaction, curiosity, cunning, restlessness, boredom, excitement, and amusement if treated right. Not every rabbit is the same. In fact, each rabbit has its own preferences, habits, and characteristics that make it unique.

If held in a small cage for months or years at a time with nothing to do aside from eating, a rabbit’s spirit will, of course, be hidden behind depression. Some rabbits may not show intelligence until they are taught. And although they aren’t quite comparable to (certain) dogs, they are certainly not stupid!

Were you ever surprised by how intelligent your rabbit is? Do you have a story to share? We would love to hear it!

Here are some tips in case you are inspired to teach: The best time to start teaching anything to a rabbit is when it is hungry. Right before food time is when Bunny is the most motivated. Use favorite treats while teaching (tiny pieces of dried fruit do the trick for us). Start off with one toy at a time and one new task at a time. Be there to instruct and encourage, but also leave them to solve the puzzle on their own after a while. There were many times when we came home to an empty toy that we didn’t know Bunny could solve on his own yet. Don’t ever force anything, because that’s when they shut down and could even get scared. If a rabbit doesn’t want to do something, it won’t. And after all, this is supposed to be fun and rewarding. We’d love to hear your success stories!