No products in the cart.
Home » A Guide to Moving with Rabbits

A Guide to Moving with Rabbits 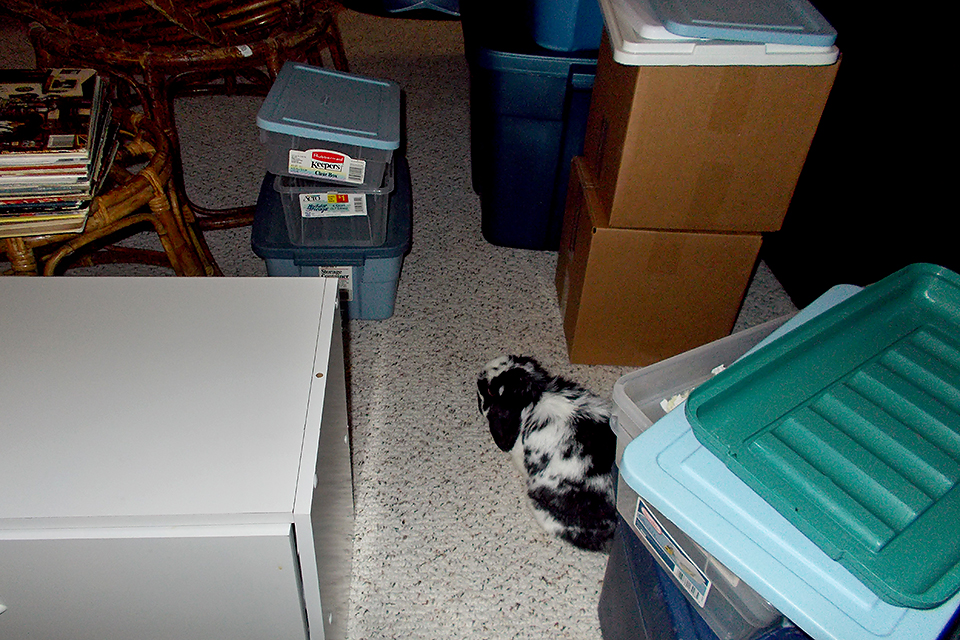 Our organized chaos – and Bunny right in the middle of it.

Let’s be honest, moving is stressful enough for us humans who know exactly what is going on around us – but to a rabbit (or any other pet, for that matter) it can be an extra hard time. First, the stuff around them slowly disappears into boxes that now stand in the way. Furniture gets moved and their human’s routine changes to accommodate the extra work. New odors and noises are everywhere and then the rabbit gets transported to a completely new environment. This place doesn’t smell like the old place and the rabbit doesn’t know how safe it might be to stay here. And the stress continues as the human slowly unpacks stuff…

When we recently moved with Bunny, we made it our number one priority to keep Bunny’s routine and area as normal as possible to keep him from feeling stressed. His toys, food bowl, litter box, and wooden castle stayed on the floor in the same spot until the very end and we made it a point to stack moving boxes somewhere else. Our bed stayed in the same spot, so Bunny could sleep under it at night, just like he always does. Only the last night was spent on an air mattress, which gave Bunny the opportunity to jump on us in the middle of the night, tickle our faces with his whiskers, and do anything he could think of to keep us awake. He finally fell asleep on my feet while I was in a particularly uncomfortable position. Since he is a free-range rabbit, we didn’t want him to sit in a cage unless absolutely necessary.

But let’s start at the beginning. If you are in the market for a house to own, you can skip the next paragraph.

Finding a New Rental Home
One of the things we learned the hard way is that “pet friendly” doesn’t equal “rabbit friendly” in the United States. And even when you contact the Realtor or whoever works at the apartment complex and mention that you own a rabbit, they might not know that rabbits are not allowed in the house or apartment. It is their job, but they still might not know. And then you end up receiving a lease agreement that mentions rabbits by name as animals that may not be in the home under any circumstances, along with squirrels, ferrets, and mice. No joke. Anyway, at that point you are either forced to hide your rabbit in the new home and face possible consequences or you have to go and search for a new place. Long story short, if you are interested in a particular rental home, it doesn’t hurt to ask for a sample lease agreement before even looking at it and possibly wasting your time.

When you do look at homes, take the time to walk though the rooms and see if there is anything foreign or potentially dangerous for your rabbit that will be difficult to rabbit-proof. This could be a door that shuts on its own when left open or a foyer area with a balustrade that the rabbit could fall through.

Choosing the Right Home
Since Bunny is a part of our family, his needs were as important as ours when we went out to look for a new home. After all, he needs to feel comfortable, too. We knew we wanted extra office space and Bunny needed carpeted floors (he slips on linoleum, hardwood, and other smooth surfaces and won’t go near them). A fenced in backyard would be an extra bonus (Bunny does like to go outside), but not necessary. The place had to be near my husband’s work, but we had no other requirements. Other rabbits might chew on carpet and would be better suited for a home with hardwood floors. Or you might have a large playpen and require extra space for your rabbit. Either way, it will make everyone much happier in the long run if the rabbit’s needs are considered from the start.

Now that we found the perfect rental (we are planning on staying here for about a year), we started organizing our stuff and boxing everything up. Make sure you keep at least one knife, your rabbit’s food bowl, and whatever bedding you use for the litter box accessible. We learned that the hard way, too. Rutabagas and celery root aren’t easily peeled without a knife…

Safety
One of the things most rabbit owners will know is that a rabbit has to be in the middle of EVERYTHING. It doesn’t matter what is going on, every moment of cleaning, packing, organizing, fixing, and carrying has to be supervised by the rabbit. While this is one of the reasons why we all love our bunnies so much, we need to make sure we protect those little ones from themselves when it is necessary. Bunny was with us while we packed small items and we made sure that everything that got stacked up couldn’t fall down on him, but we kept larger items and harsh cleaning supplies completely away. Our bedroom, the remotest room of the house, became Bunny central. We moved everything but an air mattress and a couple of rabbit toys out of there. When it came time to actually move heavy boxes and furniture, Bunny was in that bedroom with the door closed and no one had any reason to go in there. That way, he couldn’t be stepped on, nothing could fall on him, and he was able to spend his hours in a familiar area away from danger. Keeping the rabbit in a quiet, restricted space, including a (temporary) cage or kennel, is definitely a good idea. And if your rabbit is rather timid, it will be extra grateful for the privacy.

We had movers come into our house to help us pack and transport everything. On the first day Bunny was safely behind a baby gate in the bedroom. At some point one of the movers started talking to me and told me “Your rabbit came to the gate just now and looked like he wanted me to pick him up.” Oh oh. I quickly turned to him and asked if he picked Bunny up. Luckily, he said he didn’t. That’s when I realized, though, that I hadn’t told them how to behave around Bunny. They didn’t know that Bunny hates being picked up and that we never ever do it unless there is no other way. They had no idea that Bunny would wriggle himself out of their grasp and fall on the floor, possibly injuring himself. As much as Bunny needed to be restricted, he also needed us to instruct all the people involved in the move on how to behave around him. Meaning, to leave him alone.

Before we could put our old house on the market, it desperately needed to be painted and cleaned. Paint and cleaner fumes around a little rabbit are not a good idea, though, so we waited until he was safely established in the new house before we began that part of the moving process. We also did not remove any panels from outlets and made sure that no plastic, paper, cleaners, or other potentially dangerous items were left on the floor while Bunny was there. All of this was highly inconvenient and took longer than it could have otherwise. One of us always had to be with Bunny in the new house while the other worked in the old house, which is 4 hours away. This was not ideal, but it was necessary for Bunny’s safety. We were able to do it this way, but we would also have considered a temporary stay at a friend’s house or a hotel.

In the New Home
As mentioned before, being in a completely new environment is stressful for any rabbit. They don’t know how safe it is and need time to adjust and reassure themselves before they can fully relax. This may be hours, days, or even weeks, depending on the rabbit. Many rabbits will feel the need to aggressively mark their new territory by leaving poop all over the place or even spray. So what can we do to make the process as painless as possible? One thing that I noticed was that Bunny seemed to adjust quickly. He didn’t obsessively mark everything and he seemed at home after only a short time. I wondered why that was and had a thought. Bunny owns stuff. He has toys, he has a litter box, and most importantly, he has a wooden “castle” that includes 2 tunnels and a platform. He also has an Ikea doll bed that he loves to sleep on. All of these things are clearly Bunny’s and no one ever takes them from him. So when we moved into the new place, all of his stuff came with us. It already smelled like him and he knew immediately which areas of the house were now his. I sincerely believe that this made the move easier for Bunny. Imagine a rabbit that has a cage, but nothing else aside from a few favorite sleeping spots. Now in the new house everything but the cage is foreign and the new territory has to be claimed and the sleeping spots have to be reestablished. That seems like it would be more stressful. So whether it’s a cardboard house or an old rug, a doll bed, or a wooden castle, make sure your rabbit owns some furniture that can be moved.

Our new home has stairs, which is something Bunny had never seen before. Luckily, they are completely carpeted. It took Bunny about 3 days to come upstairs after us at night and another 3 days to hop down on his own. We did put up night lights, so he could see each step at all times. We have a video on our facebook page of Bunny hopping down the stairs. 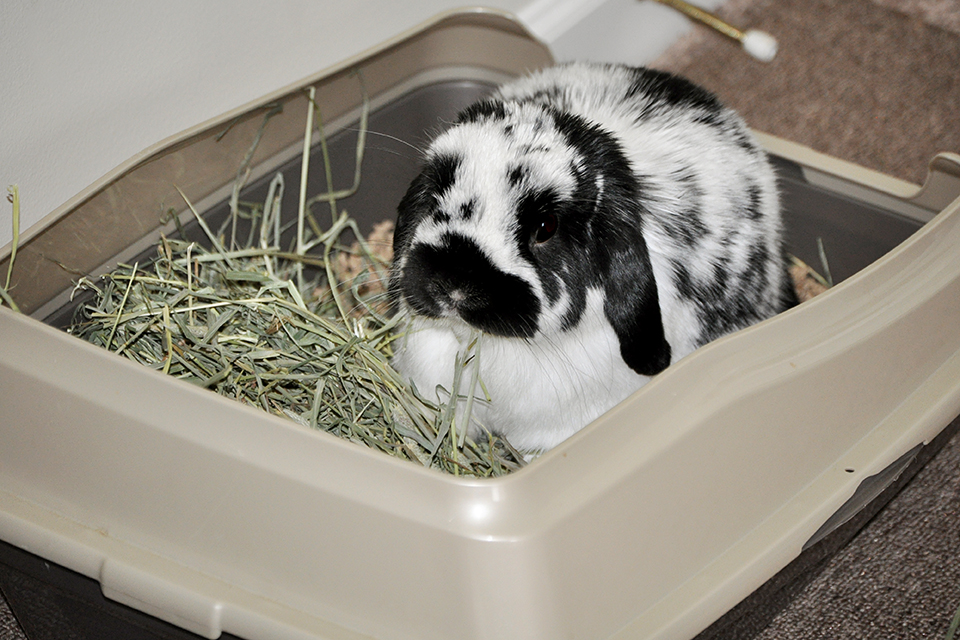 Another thing to mention is the position of the litter box. Many rabbits like to pick the spot where the litter box should go. We humans have little say in the matter. So what to do in a new home if your rabbit is like that? We placed a total of 5 litter boxes all over the living room (the small and cheap ones, mostly) and let Bunny choose. An immediate benefit was that less poop ended up on the floor because the litter boxes did all the “marking” Bunny required. After using each one, Bunny picked his favorite (and luckily, it wasn’t in the middle of the room), so we slowly removed the other ones. This took about 2 weeks and everyone is now happy with the location of the litter box.

During the adjustment period it might be helpful to keep loud noises to a minimum, especially if you have a rabbit that is timid and easily gets scared. Bunny thinks assembling furniture and hammering in nails is the most fascinating thing in the world, but many other rabbits will only experience it as extra stress.

As far as actual transportation goes, check out this article for more information.